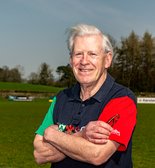 The Auld Greys are please to celebrate the 80th birthday of Ian Cunningham who has become one of the oldest players still playing any version of rugby in the UK.

Ian has a friendly, understated, Irish lilt which is easy on the ear, as Ian is as Ulster as soda bread in an Ulster fried breakfast. Ian always proudly wears a Six Nations shirt displaying the badges of the 6 participating countries along with customary shorts, hat, and in Winter, gloves to keep him warm on cold rugby afternoons in Kendal...

Ian was a schoolboy in an era in Northern Ireland when school rugby was very strong and participation very widespread. Ian attended The Royal School Dungannon where he always played wing forward and in his sixth form, the school 1st XV won through to the Ulster Schools Challenge Cup final in 1959.

After school, Ian went onto play club rugby with Coleraine Rugby club, which included playing against the great Willie-John McBride, before moving to progress his profession as a chartered surveyor in England.

Ian was one of the earliest participants of the Auld Greys as well as one of the more skilful. A bit like rugby used to be, walking rugby is a game for all sizes, shapes and abilities, but is also a game for both sexes and where novices can play alongside more seasoned players like Ian.

In the run up to the last world cup, Ian was featured in a video made about walking rugby by England Rugby: (50 Seconds onwards) England Rugby Video. At the end, we were asked to shout 'come on England', but if you listen closely enough, you can just about hear Ian shouting 'come on Ireland!'

Well done Ian on this achievement and we look forward to having you around for many more years yet.

Here's the link to video tributes for Ian, which include messages from Coleraine, the President of the Irish Rugby Football Union (IRFU) and a special tribute from all his friends at Kendal Auld Greys! VIDEO TRIBUTES

We hope to tell you some more about another of our Octogenarian players in another article. Watch this space.