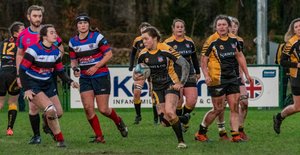 After the battling performance against Carlisle a fortnight ago, this was a subdued performance from the Wasps, despite having the experienced Hayley Hodgson and Aimee Sharp returning to the back division.

Liverpool St Helens are a new team, but showed in this friendly they already have a lot of good players, and were well organised in attack and defence, scoring an early try and building a 0v26 lead with three more tries by half time. As ever the Wasps defended well, but had few chances in attack.

Wasps outside half Fleur Stainton was injured early in the game, and despite trying to play on it was clearly affecting her, and she was soon forced off, with centre Hayley Hodgson and fullback Sarah Wilkinson sharing the outside half role.

An improved Wasps performance after the break saw them only lose the second half 10v19.

A good break from near halfway by Sarah Wilkinson set up the second score of the half. Whilst she was stopped just short of the line, the ball was moved left for a touchdown near the corner flag.

Hayley Hodgson scored the final try of the game from short range, but like the rest of the Wasps back division, she had been well marshalled by the Liverpool St Helens defence, never being given the space to set up attacking opportunities.

Kate Birchall in the centre made a number of solid tackles. There was some powerful running from a number of the pack, and the new (?) scrum half played well.

After the overly fussy referee for the Carlisle game, who clearly frustrated both teams, and at times seemed to be trying to coach the teams, this time a much better more relaxed referee, who let the game flow.

NEXT SUNDAY : 2.00pm
Another friendly, this time aganst the Littleborough Pink Warriors who play in North West 1 (the same league as Preston Grasshoppers Ladies)