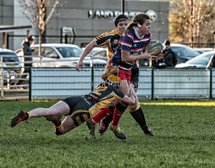 Not for the first time in this fixture, the scoreline only tells part of the story.

On a glorious (if icy cold) afternoon for rugby, it was a new look Wasps team with a lot of the better known (to me) names missing, and facing a Carlisle Cougars team who are always strong (including winning the 7s tournament at Mint Bridge in the Summer), looked a daunting prospect. Whilst it was a big win for the Cougars, they were made to work hard for each score.

The Wasps defence has traditionally been a strength and this team continued that. Often the Cougars seemed to have overlaps, only for them to disappear as solid tackles came in. In one move in the first half, the Wasps left wing made a tackle, was back up to take the next Cougar, then slowed the third enough for another tackler to stop her.

The most promising signs however were in attack, where the forwards were making ground against a strong tackling team, and the good passing of the backs, with confidence with the ball in hand, would have seen more scores against a defence which was not as good as Carlisle’s.

Whilst there were lots of new names, one of the star performances came from one who has been there from the very early days. Two early crunching tackles from outside half Sarah Wilkinson, meant the Cougars certainly knew she was there, and with the Wasps pack under pressure from a powerful Cougars scrum, and scrum half Fleur Stainton under pressure from a scrum half who had read the James Gough book of how to play on the edge, the outside half was going to take a few difficult passes, but they all were dealt with, and as the pack came into the game, so did the strong running centres.

Just the one home score, a well taken try by the right wing, towards the end of the game, after a good team attack.

The Wasps are next due to be at home on 19th December vs Sunderland. With a very small League, there will be far too few chances to catch them, and this team deserves more support. So if you have a free afternoon, do come down and give them your support.