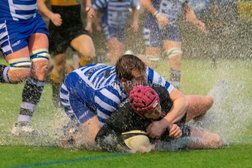 An excellent performance from both teams in dreadful conditions

An eventful afternoon. Heavy rain meant there was a lot of standing water on the main pitch, so the game was switched to the 3G, then the referee coming from the North East was caught in traffic on the A66 at Stainmore, where a caravan had over turned, which originally led to a delay of thirty minutes, then a switch of referee with Martin Maughan coming from Carlisle, so the kick off was finally at 4.00 under the lights.

The pitch started in good condition, but there was a strong wind.

Kendal made an ideal start, a Pocklington handling error from kick off put Kendal on the attack and after pressure in the twenty two, Matt Houghton forced his way over with Glen Weightman adding the conversion 7v0.

Pocklington with the benefit (if there was any) of the conditions soon came back, and it was clear as in the away game that they were going to use their very powerful scrumage to put Kendal under pressure, forcing a number of penalties.

With difficulties clearing their lines, and not a day to throw the ball around, Kendal were under constant pressure, but defended heroically until finally the Pocklington pack drove over from a close range scrum after twenty minutes. 7v7 with the conversion.

More of the same followed, and just as it looked as if Kendal had held out for half time, Pocklington took a half time lead with a penalty from in front of the posts in first half injury time. 7v10.

I’m not sure who moved faster for the shelter of the club house on the halftime whistle which followed the kick, the players or their supporters.

Kendal came storming out at the start of the second half, and patient building up lead to Glen Weightman having the opportunity to tie the score with a penalty 10v10

Kendal continued to have the better of play, but on a day where handling errors were inevitable, the Pocklington scrum was a big weapon.

The decisive score came from Pocklington ball. A handling error on halfway saw the ball turned over and it was quickly moved to the left wing where Dini Noyo, with plenty to do somehow powered down the wing for a try. If that was spectacular what followed was almost unbelievable, as from the far touchline, Glen Weightman somehow judged conditions perfectly to put the conversion over. 17v10

Kendal brought on Lewis Kincart and Nick Carlton, for Jordan Johnson and Dan Greenwood (?) with Carlton taking Ben Dixon’s place on the wing, and Dixon joining the back row.

A demonstration of the conditions came with a kick by Glen Weightman from well within his half, which looked an excellent touch finder in the twenty-two, but instead ran dead to bring play back for a Pocklington scrum.

It was clear there was a lot of standing water building on the pitch and on a rare Pocklington visit to the Kendal half on the far side of the field, the referee called the two captains together. They consulted their teams and Kendal seemed ready to play on, but clearly wiser heads prevailed in the Pocklington side, as condition were only going to get worse and the game was abandoned.

The view on the touchline was the game had passed sixty minutes and therefore the result would stand – but I as less sure.

A massive amount of praise should go to both teams for competing so well in such dreadful conditions, to the referee for just making it, and to those supporters who stuck it out – especially those who had come for Ladies day in clothes totally unsuitable for the weather conditions on the afternoon.

Greg had almost twice as many votes as Glen Weightman, the only back on the list of six who got a vote

All 30+ who played (plus the referee and all of us who stuck it out until the final whistle) need a prize for endurance.

No game First XV game next weekend, so next game is a week Saturday in Leeds at Moortown, which will be a very tough test but hopefully in less challenging conditions.

For obvious reasons the report was written 100% from memory this week, but hopefully it is accurate

Player of the match