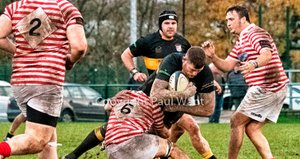 After two postponed League games, plus one in the Cumbria Cup, the First XV finally returned to action after almost a month, for only the third home game of the season.

Reece Tomlinson and James Gough returned to the side, whilst Lewis Kincart came in on the left wing, for his first appearance of the season, after a spell at Wharfedale. Dan Lowther and Mark Carruthers retain their places in the back division, with Danny Barker was back but starting on the bench.

With the two postponements Kendal had dropped from second to fifth, with visitors Manchester moving into second, although only a point ahead, despite having played two more games, so an important test for both teams.

Manchester started the better, and Kendal hardly touched the ball in the opening ten minutes, with the Kendal scrum clearly in trouble.

Against the run of play Kendal took the lead after twelve minutes. Glen Weightman put a kick from his own half into the Manchester twenty-two to earn the team a put in to a lineout. The forwards took the ball and set up a drive in the Manchester twenty two, earning a penalty, then from a second one in front of the posts, rather than take the points, Glen Weightman ran the penalty, feeding Matt Houghton, who broke through to cross the line, but then lost the ball, regained it to touchdown. Everyone held their breath waiting for the referee to disallow the try, but either he missed it, or had seen a Manchester hand rip the ball from Houghton’s hands. Either way Kendal had a 5v0 lead.

Kendal came more into the game with Steven Nelson and Matt Houghton breaking tackles and making a lot of ground, with one great run by Houghton into the twenty two, seeing no one in support for a scoring pass.

Manchester’s backline seemed to be struggling with several passes not finding their intended target, but the ball always seemed to fall safely to their hands, rather than the Kendal backline.

Kendal extended their lead after thirty three minutes. Manchester tried to run the ball out of defence, but lost it. Kendal set up a counter attack to the line, where the referee saw a Manchester player transgress, he was give ten minutes on the sidelines, and after a short wait, Kendal were awarded a penalty try. 12v0.

Manchester seemed to trying to slow the game down at lineouts, taking a long time to join, to run the clock down, but the delay seemed to instead disrupt them, with them failing to take clean ball.

The score remained the same at half time, and the view on the touchline, was Kendal should have been further ahead.

Manchester opened their scoring seven minutes into the second half, when a rare tackle was missed on the left, to let them in but the conversion was too difficult. 12v5.

It only took three minutes for Kendal to restored and extended the lead. Lewis Kincart stole the restart kick to put Kendal on the attack, and a penalty was put to touch for the forwards to drive to the line Whilst the pack was stopped, when James Gough tried to move the ball, a Manchester prop knocked the ball down, a second Yellow card was inevitable, but the referee again decided it stopped a try scoring opportunity, and awarded a second penalty try. 19v5.

Kendal made a first change with Danny Barker replacing Mark Carruthers in the centre.

Just after a quarter of an hour of play, Manchester were back in the game. Having seemed to have made a mess of a move in midfield, a clever kick was put to the Kendal line, and gathered by a Manchester player. Dan Lowther got back to make a tackle, but illegally and he was the first Kendal player to get a yellow card, and as the last line of defence, there was no surprise when a third Penalty try was awarded.

Five minute later Manchester tried to run out of defence, but their player was tackled into touch by Ben Dixon. No idea what happened next (and I was fairly nearby) but Danny Barker clearly saw something which upset him, and had to be restrained by coaching staff. The referee spoke to both captains, not for the first time, and Danny and the Manchester No.8 were given ten minutes to cool off (and seemed to come back friends).

Manchester were winning a lot of penalties, by getting in quickly over Kendal ball.

Kendal could have had another try. Ben Dixon made a break and fed the returned Danny Barker, who made a lot of ground, and when stopped got the ball away to Jordan Johnson, in support, but he was not able to force his way over.

Lewis Kincart almost got to a clever kick through by Glen Weightman, but failed to firmly connect with the ball as he tried to kick ahead, and a Manchester player was able to gather.

There was concern for Kendal supporters as Ben Dixon was forced off after receiving treatment for what seemed to be an ankle injury. Dan Shorrock returned.

When awarded a penalty in front of the posts, but some distance out, Glen Weightman made no mistake, to ease Kendal nerves by extending the lead to above a single score 22v12

Kendal did not deal well with the kick off which put Manchester on the attack.

A Manchester centre took a bad option, deciding to take Steven Nelson on in the centre, with Nelson coming away with the ball. He got it away to Dan Greenwood who made a break and seemed to bounce out of a tackle, but the referee decided the tackle had been made, and penalised Greenwood for failing to release the ball before carrying on.

Manchester took the kick to gain a losing bonus point and set up the opportunity to snatch a victory. 22v15

Kendal held out and when awarded a scrum in injury time, Dan Greenwood made no mistake, picking up to hammer the ball to touch to end the game.

Another game where Kendal lost the second half, and no bonus point, but a important win against one of the League’s stronger teams, whilst not playing at their very best.

There were some positive signs from the returning Lewis Kincart and Danny Barker, with Matt Houghton and Steven Nelson strong in attack and defence, but concerns about injuries to key players

Your KENDAL MAN OF THE MATCH : Steven Nelson

More or less as expected - Stockport march on away at Park, so we will have to take an unbeaten record at their ground next weekend to progress.

Yet another losing bonus point for Altrincham Kersal - this must be a record.

We move up just the one place (over Manchester) as Waterloo and Glossop got the expected good wins.

Player of the match