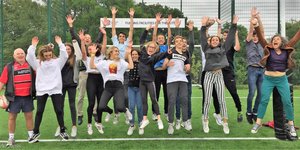 Earlier this week, Kendal Rugby Club were visited by a group of eager and excited Spanish students, all of whom are staying with surrogate families in town for the next couple of weeks. One of their aims is to learn more about British culture, as well as developing their English language skills. The rugby club played its part, by opening its doors to introduce the group to the wonderful world of rugby.

The visit comes as part of an initiative put forward by the husband and wife team at Bankfield Languages, who celebrate their 9th year in action. Organising home-stays between students in Kendal and students in Revenga (a small village in the Segovia province), they offer the chance to both young and old participants to develop not only their language skills, but also improve their understanding of the different cultures they are thrown into. After huge success with the FANTASTIC hosting families, where long-term friendships are flourishing, the group of students enjoy some rather unique experiences; with visits to the Lakes, nearby cities and even in some cases attending international football games!

The most enthralling of all though… their visit to Kendal Rugby!

Chairman of the club, Stephen Green had this to say:

“Kendal Rugby Club were delighted to welcome a group of Spanish students who are visiting Kendal on a cultural and language course. The Rugby Club is pleased to make its facilities available to the wider community and already shares its ground with the local Archery and Canoe Clubs. The artificial pitch is used regularly by football clubs and local schools.

The students spent a couple of hours learning about, then playing ‘walking rugby’ as well as competing with each other in rugby goal kicking. Rugby is played in Spain but is not a major sport and we hope this experience will lead to their further involvement in their own country.”

A hugely successful day for all those involved and one we hope has influenced and encouraged the group to give rugby a go – we’re always delighted and eager to be involved with any community projects, offering our facilities and opening our doors – if you have anything you wish to use some of our fantastic facilities for, please get in touch today!